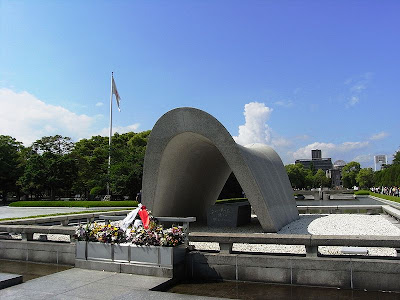 I manage to dig up some of my last year travel photos to Hiroshima Japan, a visit to Hiroshima City is never complete if you didn't visit the Hiroshima Peace Memorial Park. If you all remember the history book about the WWII on how Japan surrender because of the first Atomic Bomb was drop here and end the war in Asia.

Hiroshima Peace Memorial Park is a large park in the center of Hiroshima, Japan. It is dedicated to the legacy of Hiroshima as the first city in the world to suffer a nuclear attack (August 6, 1945), which led to the death of as many as 140 thousand people by the end of 1945.

The location of Hiroshima Peace Memorial Park was once the city’s busiest downtown commercial and residential district. The park was built on open field that was created by the explosion. Today there are a number of memorials and monuments, museums, and lecture halls, which draw over a million visitors annually.

Here is some of the photos of the place:

Memorial Tower to the Mobilized 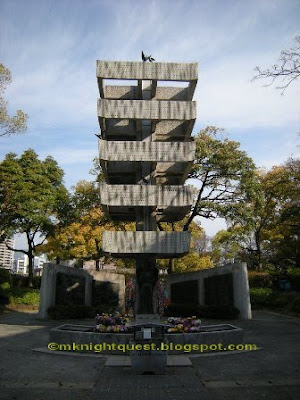 To make up for the labor shortage, the government enacted the Student Labor Service Act in August 1944. This act required students in middle school and higher grades to perform labor service in munitions factories and the like. Then, in November, many students were required to participate in tearing down homes and other buildings (building demolition). The purpose was to create fire-breaks to limit the expansion of fire in the event of air attacks. In Hiroshima City, of the roughly 8,400 students in the national upper level schools, about 6,300 died on the day of the bombing.

Most students working at various industries around the city were also killed.
After the war, the government only permitted mobilized students killed in the atomic bombing or in air strikes whose names and date of death were known to be enshrined in Yasukuni Shrine. In response to this, bereaved families began a movement to create a list of the dead and donated funds to build this tower. 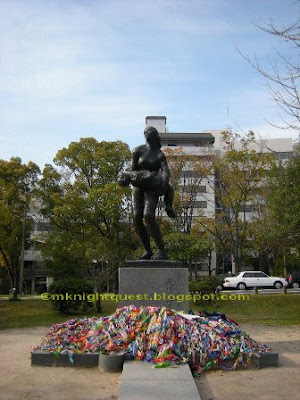 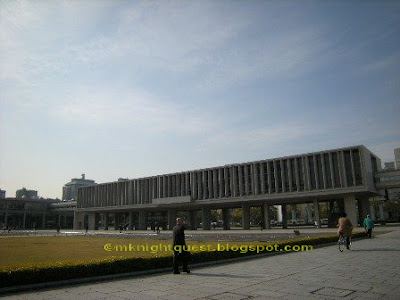 The Museum has exhibits and information covering the build up to war, the role of Hiroshima in the war up to the bombing, and extensive information on the bombing and its effects, along with substantial memorabilia and pictures from the bombing. The building also offers some marvelous views of the Memorial Cenotaph, Peace Flame, and A-Bomb Dome. 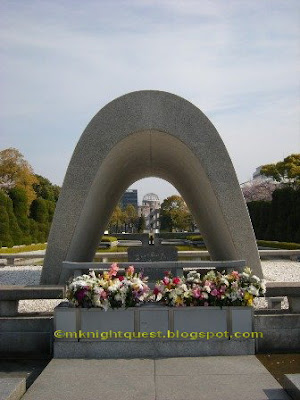 Near the center of the park is a concrete, saddle-shaped monument that covers a cenotaph holding the names of all of the people killed by the bomb. The cenotaph carries the epitaph, "Repose ye in Peace, for the error shall not be repeated." Through the monument you can see the Peace Flame and the A-Bomb Dome.
I bowed my head, stand in silence and pray for the 140,000 souls who had perished in the nuclear bombing.. 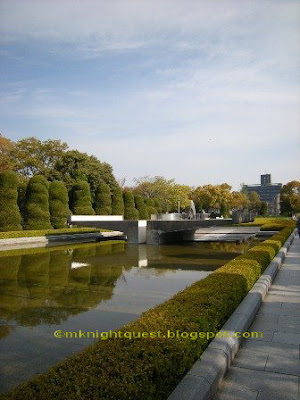 The Peace Flame has burned continuously since it was lit in 1964, and will remain lit until all nuclear bombs on the planet are destroyed and the planet is free from the threat of nuclear annihilation. 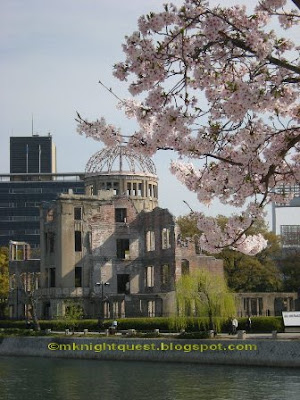 The A-Bomb Dome is the skeletal ruins of the former Industrial Promotion Hall. It is the building closest to the hypo center of the nuclear bomb that remained at least partially standing. It was left how it was after the bombing in memory of the casualties. 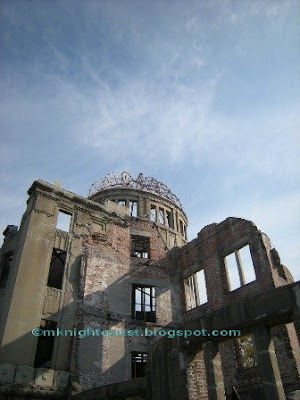 The A-Bomb Dome, to which a sense of sacredness and transcendence has been attributed, is situated in a distant ceremonial view that is visible from the Peace Memorial Park’s central cenotaph. It is an officially designated site of memory for the nation’s and humanity’s collectively shared heritage of catastrophe. 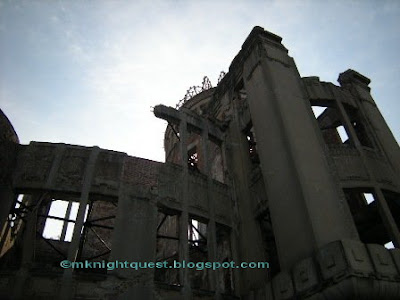 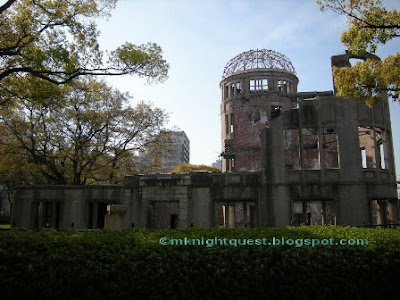 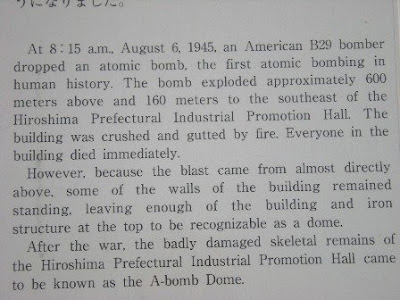 The A-Bomb Dome is on the UNESCO World Heritage List in 1996. 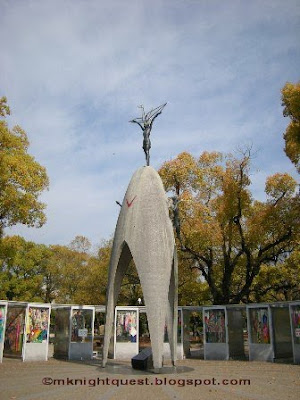 The Children's Peace Monument (原爆の子の像, Genbaku no Ko no Zō) is a monument for peace to commemorate Sadako Sasaki and the thousands of child victims of the atomic bombing of Hiroshima, and is located in Hiroshima Peace Memorial Park, itself in the city of Hiroshima. Designed by native artists Kazuo Kikuchi and Kiyoshi Ikebe, the monument was built using money derived from a fund-raising campaign by Japanese school children including Sadako's classmates, with the main statue entitled 'A-bomb Children' being unveiled on the 5th of May, 1958, or (Children's Day in Japan). Sadako is immortalized at the top of the statue, where she holds a crane. Thousands of origami cranes from all over the world are offered around the monument on a daily basis, with ancient Japanese tradition holding that one who folds a thousand cranes can have one wish granted. They serve as a sign that the children who make them and those who visit the statue desire a world without nuclear war, having been tied to the statue by the fact that Sadako died from radiation-induced leukemia after folding just under a thousand cranes, wishing for world peace. Beneath the main structure lies a bronze crane that works as a wind chime when pushed against a traditional peace bell from which it is suspended, the two pieces having been donated by Nobel Laureate in Physics Hideki Yukawa.
Posted by M-Knight at 2:07 PM

I love those monuments and memorial

wow.i had been dreaming to go to japan since school.but never did. see your photos, it make me quite jealous.hihi.but still, i like to read it. =D