History Of Sarawak DUN Where It All Begin

The first Sarawak State Legislative Assembly was established after its inaugural meeting in Bintulu, Sarawak on 8 September 1867. 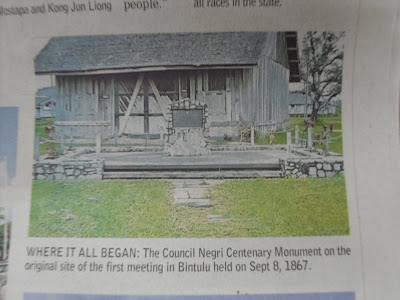 In August 1976, the Dewan Undangan Negeri (DUN) complex, sited on 90 acres of beautifully landscaped and manicured gardens, has served parliamentary democracy well. The many DUN sittings held in the august House over a period of 33 years have contributed to the progress of Sarawak.

The foundation stone of the DUN complex was laid by the first Prime Minister of Malaysia, the late Tunku Abdul Rahman Putra Al-Haj, on 30 August 1973 at the satellite township of Petra Jaya.

The building was completed in 1976 and officially opened by the Yang di-Pertuan Agong, Tuanku Yahya Petra in August 1976 followed by the Rulers' Conference in the Dewan complex. The three-floor which can accommodate about 1,000 people, the Dewan Undangan Negeri (DUN) chambers with 160 seats and a gallery for 224 people. 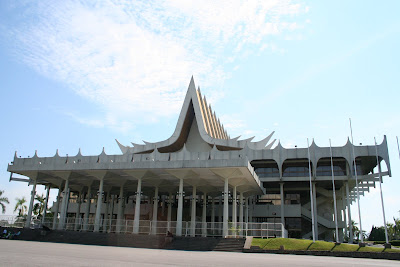 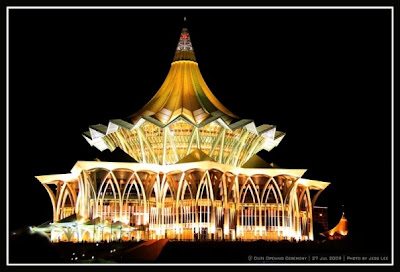 This nine-storey high building is the venue for future Sarawak's new state legislative assembly sittings.[1] The distinctive "payung" (umbrella) roof of the new DUN complex is an iconic landmark for Sarawak what the Sydney Opera House is to Australia or the Eiffel Tower is to Paris. The architecture of the new complex combines unique elements of Sarawak's heritage with state-of-the-art intelligent building

automation systems, multimedia communication facilities, and environmentally-friendly features. The new complex development covers and area measuring 172 acres near The AstanaSarawak River in Petra Jaya, Kuching. The new chamber can hold up to 108 members, each with their own office. It also has 142 seats for civil servants, 86 in the VIP gallery and 106 in the public gallery. Its architecture and design have meticulously (Governor's Residence) on the banks of

taken into account the future needs of elected representatives.

The building is fully equipped with high-tech information and communication technology. This new DUN complex, perched on the promontory on the pristine bank of the Sarawak River and nestled between the Astana and Fort Margherita, has been described as one of the most beautiful buildings in Southeast Asia. It is also a depiction of the state’s struggles and achievements over the years after gaining independence through the formation of Malaysia and as a multi-racial society.[2] Reinforced by nine gigantic pillars and numerous arches, the building reflects the sovereignty of the people’s power as well as the support of all the races in the state.